Math dice games are the perfect example of learning accompanied by fun and relaxation, and when they are math dice games, it’s in a guaranteed way. Dice Games not just teach maths but also a variety of other subjects. They are affordable and comes with many productive benefits like gracefully improving the social and visual skills of children in classrooms or homes. 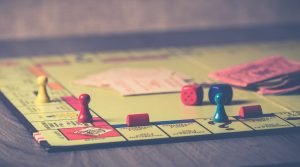 #1 Pig (One of My Favourite Math Dice Games)

Pig is one of the best and simple dice games that have been played for a long time. To win this game, you have to be the first player who scores 100. It requires two dice, paper and pencil. Kids have to roll the dice and add the numbers, repeating as many times as they like on each turn. An exciting twist in the game is that if a player scores 1 then in that whole round, his/her score is 0.This makes the game exciting, so children will practice addition skills in an entertaining way.

Shut the box can be played on a specially designed box. This math dice game focuses on additional techniques. To win this game player has to close each number’s box from one to ten.

If the sum is more than ten, a player can close all the number boxes, which on adding gives the total sum. If there are no numbers available, to sum up to the dice total, the turn goes to the next player, and the game continues until someone finally “shut the box” by closing the last available number.

This game has been around for a long time and is fantastic for the necessary additional skills. You need three dice, a pencil, and paper for this one. For the first turn, a player rolls all three dice at once, the highest number in the dice is set aside.

Roll the last die, then add all three numbers together. Each player takes a turn doing this, and the one whose highest score wins the game. Set number of rounds, or see who can get to a designated number like 100 first.

A teacher should supervise this math dice game. Each student will need a mat or paper on which place value should be written. The goal of this game is to reach the largest possible number in 10s, 100s, or more. First, the teacher would roll a dice, and students will decide where they would like to write that number on their mat or paper.

For instance, if the number is to be in the 100s, the dice will be rolled out three times by the teacher. Students will be writing the amount at any place value they want. And one with the largest number after each round gets the point. In the end, whoever has more points wins the game.

All you need to play this math dice game is a graph paper, some colored pencils, and dice. Firstly a player rolls two dice together and draws a rectangle shape by using the same numbers as the length and width on the graph paper by colored pencil.

You can shade it as per choice. The second player also has to do the same until there is no room to draw any more rectangles on the graph paper. The person with the highest number of value wins the game.

The goal to win this simple game of dice is to be the first one to reach as close as possible to 1000 without going over it.

The second player has to do the same thing with his/her dice.
A lot of tactics and strategy involved in this game of dice and decisions should be made to reach close to 1000 as much quickly as can without going over it.

2 Dice & a graph is used in this simple dice game. The students have to draw the product of the number on graph paper as a rectangular array.

For example, if a 3 and a 2 are rolled, that means 3 x 2 = 6. The array is to be drawn as 3 rows and 2 columns, to make a rectangular shape. Label each array with the number it goes with.

Math dice games are fun and are based on mental maths that helps students to increase their pace in maths. Players have to roll dice and set the numbers into equations to get as close as possible to a target number to win the game. These games will definitely help teachers to train students. I believe that this playful information satisfied all your queries & doubts regarding math dice games. But if you have any doubts regarding the topic then comment below and we will respond to very soon.

Also, share this article with your friends and let their kids enjoy these fun & simple dice games.